Expert volunteers devoted one working day to non-profit organizations and together with them they were seeking for solutions to urgent questions.

All in all, 10 unique solutions in the areas of communications, architecture, legal and IT services are the result of the Pro Bono Marathon, which is an event organized annually by the Pontis Foundation.Expert volunteers devoted one working day to non-profit organizations and together with them they were seeking for solutions to urgent questions.

The claim of this year was “Systemic Changes Competition”. In the centre of interest were questions which have impact on the whole society. The Pro Bono Marathon was attended by 12 companies that helped 10 non-profit organizations. This year was the first time when a public institution – the Financial Policy Institute was also involved in this event.

“This year, the Pro Bono Marathon hosted good, curious and involved people. They turned their experience into advice, practical recommendations and solutions for non-governmental organizations that are not afraid to engage with difficult themes. They helped them with the promotion of interesting projects, devised functional IT solution or advised them on legal steps that can trigger a social discussion and thus contribute to changing the system, “says coordinator of the Pro Bono Marathon, Barbora Pálešová from the Pontis Foundation.

What issues have the companies managed to solve?

Communication strategy to promote scholarships for children from marginalized groups

C. S. Lewis Bilingual High School together with the PRime time agency developed a proposal for a complex communication campaign focusing on 3 different areas according to the target group:

The global movement #GivingTuesday, which is a worldwide celebration of donating and generosity, is going to be launched In Slovakia. The agencies SCR and This Is Locco have joined their powers to enrich the Pontis Foundation, the national ambassador of the project, with great ideas. The campaign will be promoted under the claim “I can, so I help,” which is simple and clear. The intention is to “re-brand” giving and unselfishhelp which is easy and very natural. The agency’s global logo was adapted to Slovak conditions and was inspired by the folk pattern from the village of Čičmany. 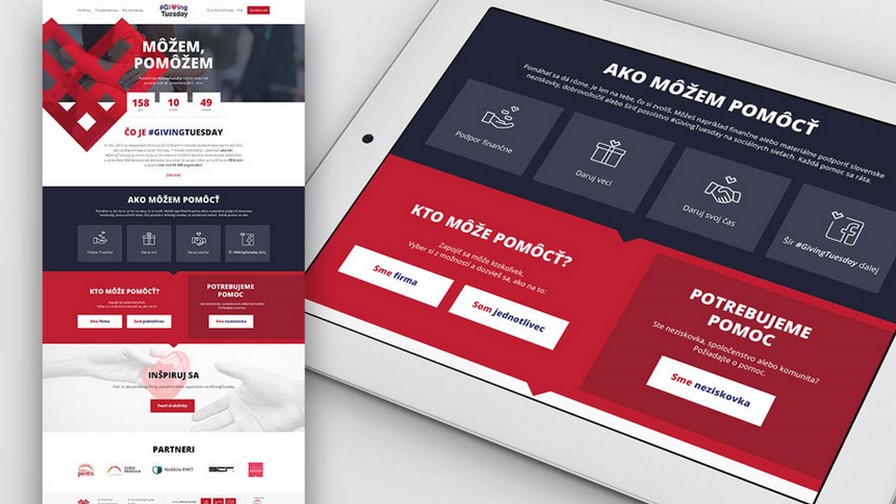 Communication strategy for the popularization of expert materials for young generation

Surveys revealed that up to 40% of the Slovaks do not trust information in the mainstream media and up to 24% trust information published by the conspiracy media and social networks. That’s why communication experts from ESET came up with a campaign “Young people against HOAX: #BoričiHoaxov”. This campaign should encourage young people to critically think about what they are consuming. An interactive web will be launched within the campaign where the young generation will be able to try how easy it is to make up any information, takeit out of context or to spread misinformation. 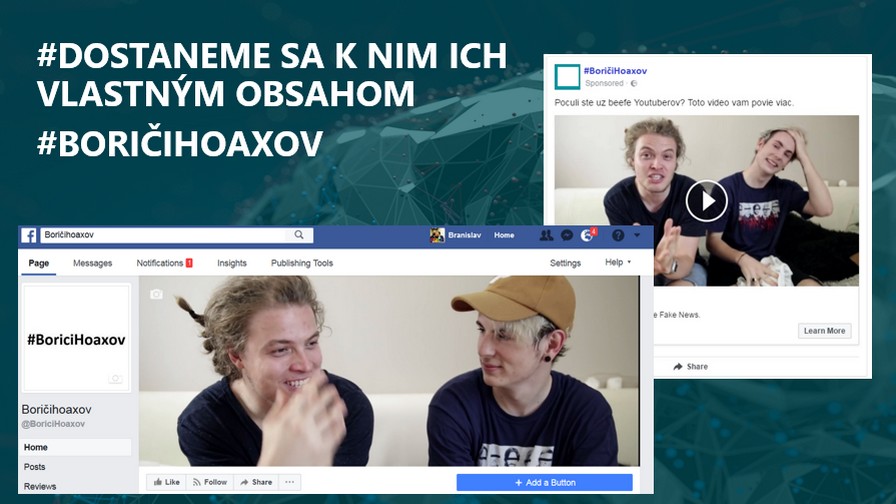 TRIAD Advertising agency and a non-profit organization from abroad

Veganism is not just about the food. It concerns multiple areas of life, for example, the choice of consumer products according to the country of origin of the used materials. This is also a part of the content of the TRIAD Advertising campaign. At the same time, this campaign aims to overcome stereotypes about veganism and vegans. That’s what the agency wants to achieve via a focused facebook advertisement that will be linked to a webpage with an appealing design. It will reveal information about the origin of goods they are buying every day as well as the way they are produced. “We will show people what is hidden behind their everyday decisions,” explained Petra Papajová from the agency.

The agency Diorama was focused on the issue of the Roma people. “Roma are often not happy with the situation they find themselves in. In reality, they want to lead an ordinary life like all of us. What’s interesting is that the Roma like us much more than we think and consider us to be their idols,” Michaela Martonová explains the idea behind this campaign. The agency came up with a reality show concept targeted at the mainstream spectator who will be able to sign up for a fictitious talent contest searching for an idol. In the end, he will find out that he is the idol himself. 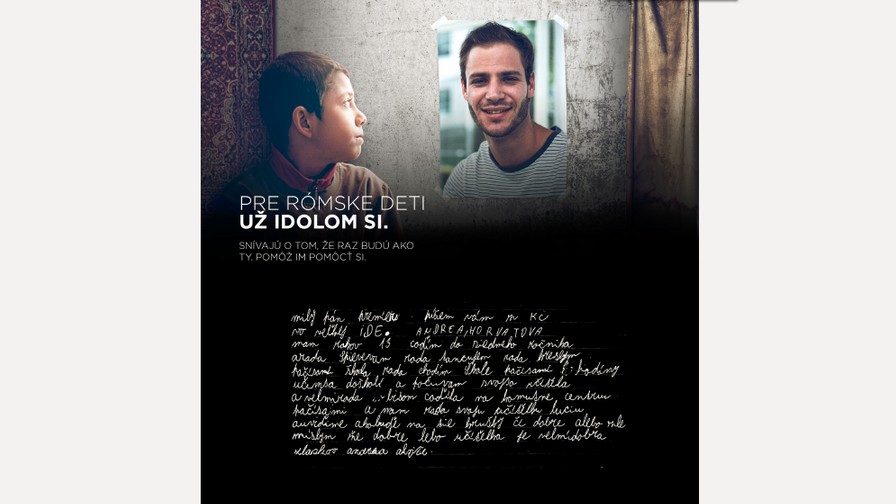 Visibility agency and a non-profit organization from abroad

Setting up an overall communication of non-profit organization

During the Pro Bono Marathon, the Visibility agency helped to set up overall communication for a non-profit organization from Asia. During one day, they also created a functional website for a planned activity “webinar” that teaches the relatives of people with mental disabilities how to improve their lives. It also points to the equality of healthy and disadvantaged people. The website was created in a minimalist but functional environment that is easily editable and customizable for future communication needs. 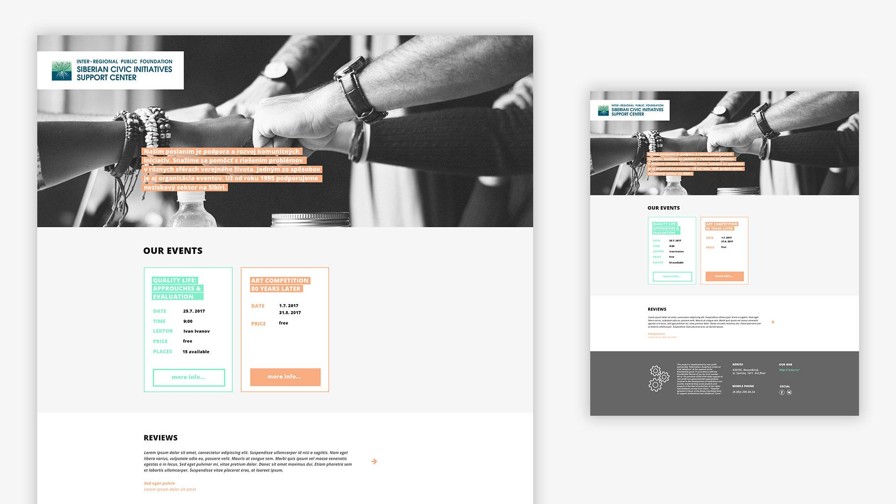 The agency Istropolitana Ogilvy and the Slovak Governance Institute

Promotion campaign of the portal The Message to the Mayor

On the web link odkazprestarostu.sk you can report an incident which concerns a material matter, such as reconstruction of public spaces, to the mayor of a particular municipality by few clicks. This service has been operating for 7 years so far and it includes about one third of local governments. Therefore, the SGI decided to promote it both towards the public as well as towards the mayors who have to register to it so that citizens can send their suggestions to them. The agency came up with an off-in advertising which will be implemented in specific cities. It will use night projections of photo-documentation of specific problems or the well known “Hellou, citizens” vehicle. Its aim is to draw public attention, but also put pressure on mayors to sign up for the portal. 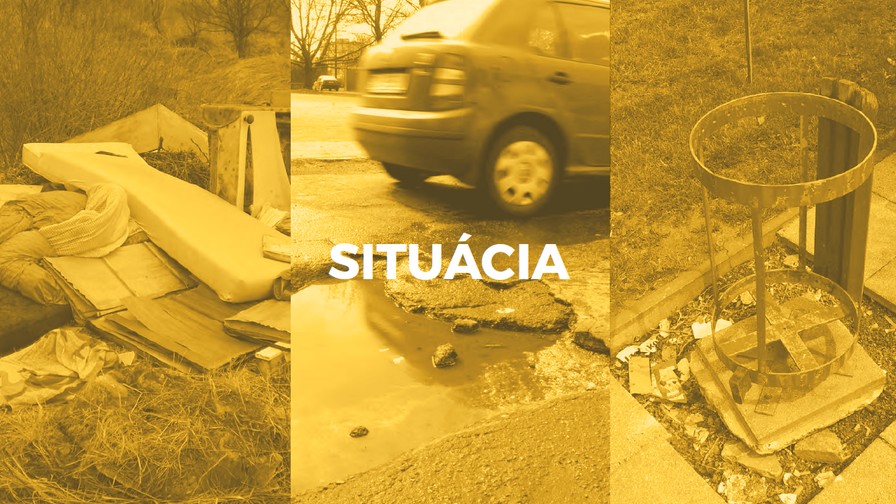 Ixworx and Skill Drill in cooperation with the Sova civic association

The game ChemPlay was created in 2014, under the SOVA civic association by 14-year-old pupils Adrián and Ivana. In the following two years, the game was tested by pupils and teachers and presented at international scientific events. Since the last year, ChemPlay can also be bought in stores. Now, its authors want to convert it to digital form. The company ixworx and Skill Drill, the game development school, were helping them to achieve it. During the Pro Bono Marathon, they developed the logic of the game mechanics and roughly devised the graphic design of the game. 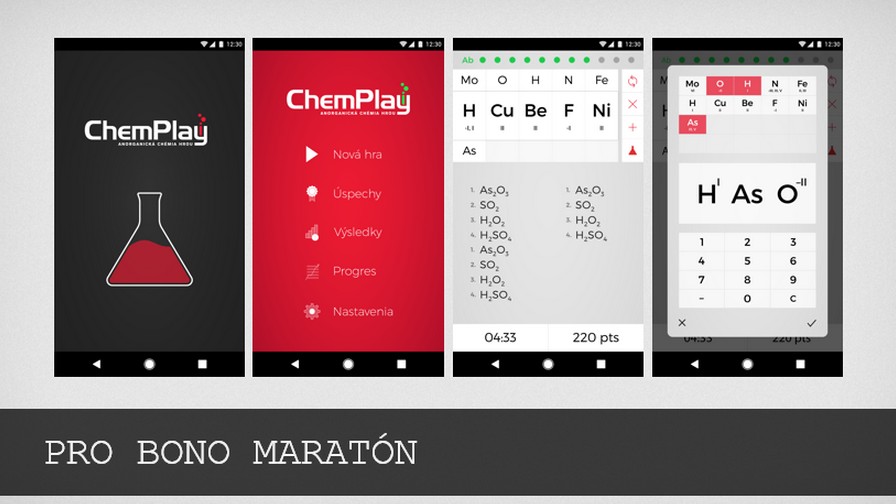 In 2015, the Institute for Financial Policy developed an analysis of the effectiveness of the syringe exchange programme for the Odyseus civic association. This analysis showed that programme benefits exceed state costs up to 2.9 times. Despite of this study and other advocacy activities of organizations working with this target group, the so called “harm reduction” services are not systematically funded and the number of organizations providing them is constantly being reduced. During the Pro Bono Marathon, a team of experts prepared an action plan for advocacy campaign for the Odyseus civic association to secure the financing of harm reduction services in Slovakia. The goal of the campaign is to achieve legislative changes in favour of setting up funding for these services. At the Pro Bono Marathon, the team set up the strategy and action plan and agreed to cooperate also after the end of the marathon. 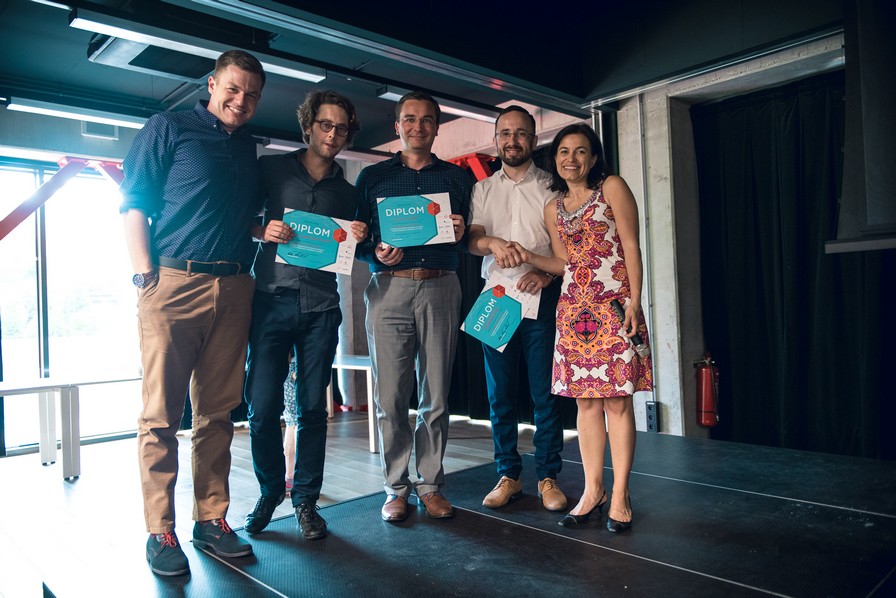 Practical education does not work very well in Slovakia. Therefore, systemic changes are required. Architecture studio Dream Architecture Reality came up with a solution – to build a studio where students can gain experience under the guarantee of a certified employer. During the Pro Bono Marathon, we contacted the Slovak Chamber of Architects, Ľubomír Závodný, a representative of schools, as well as representatives of various faculties of universities in Slovakia. Next step would be to find out about general interest in this project. There would be discussions taking place with all participants and entry conditions would be set. If it would be possible to realise this project, we would work on expanding it and integrate it into study programmes. At the end students would be given the opportunity to tackle real problems in their field and thus get the necessary skills. 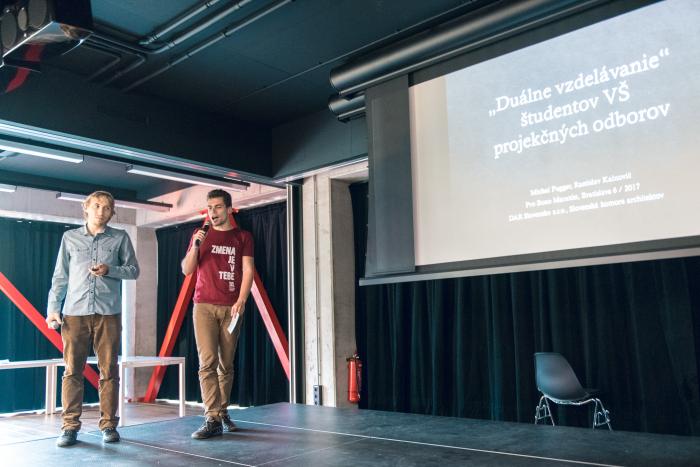 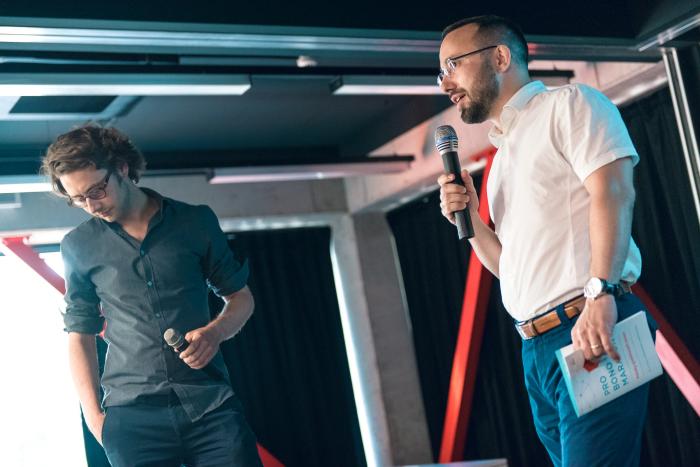 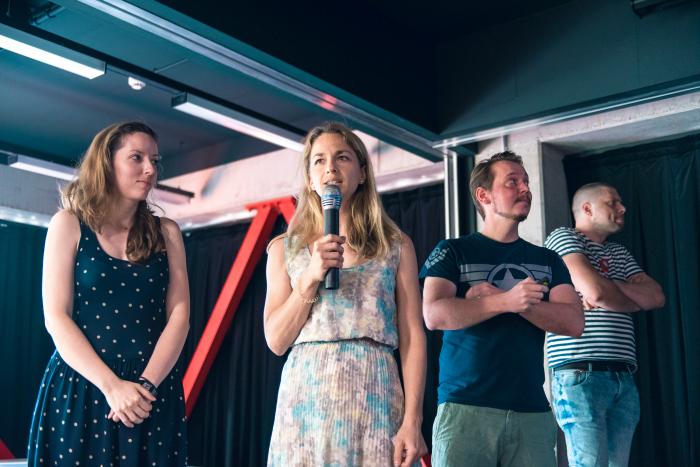 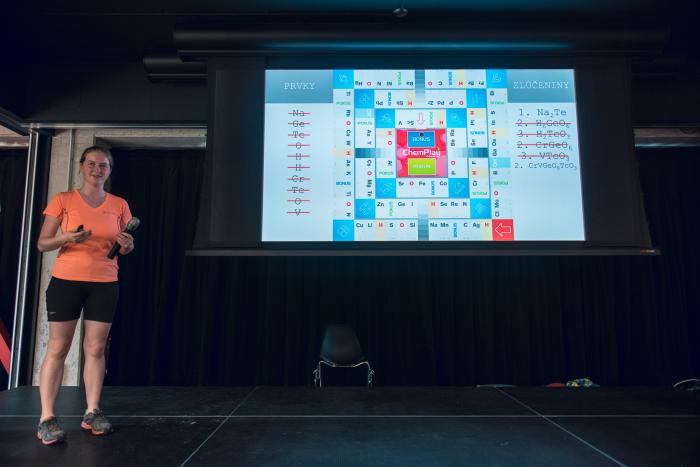 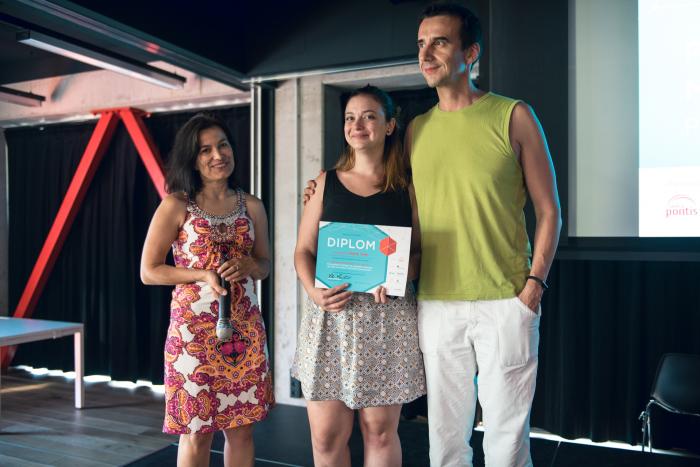 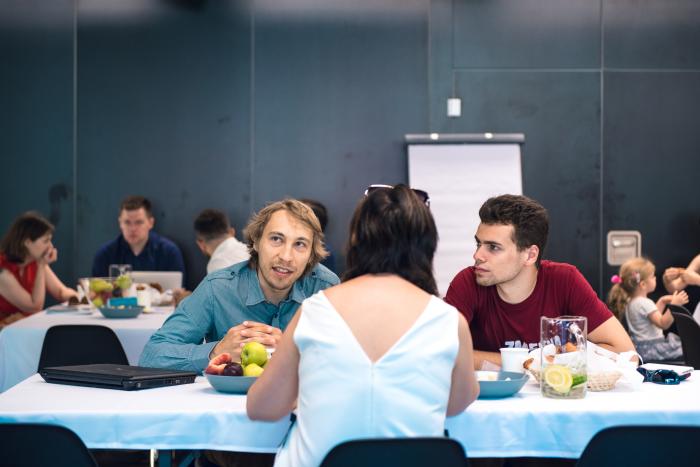 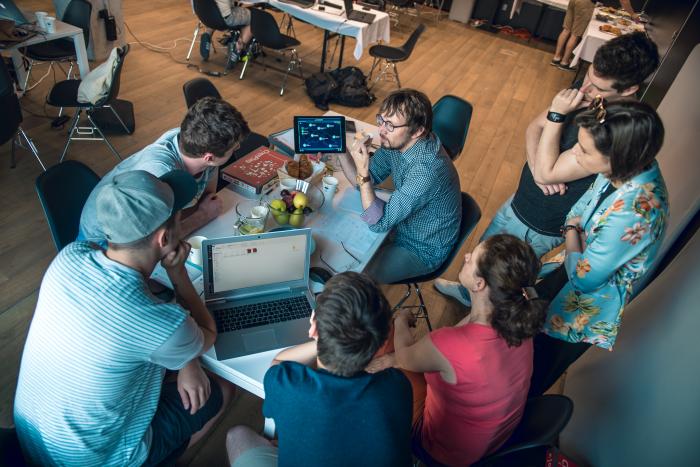 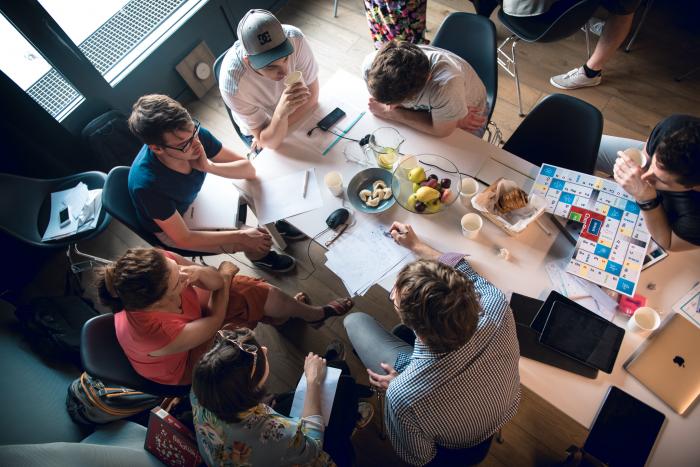 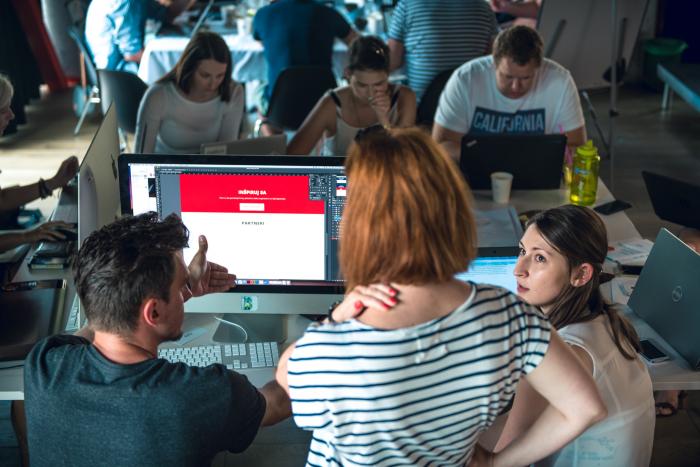 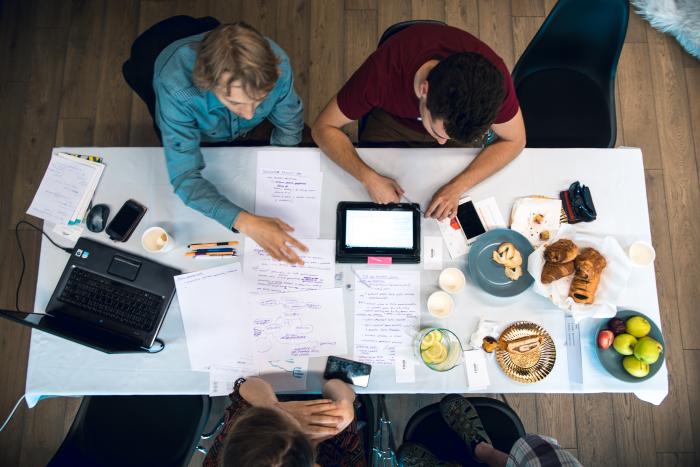 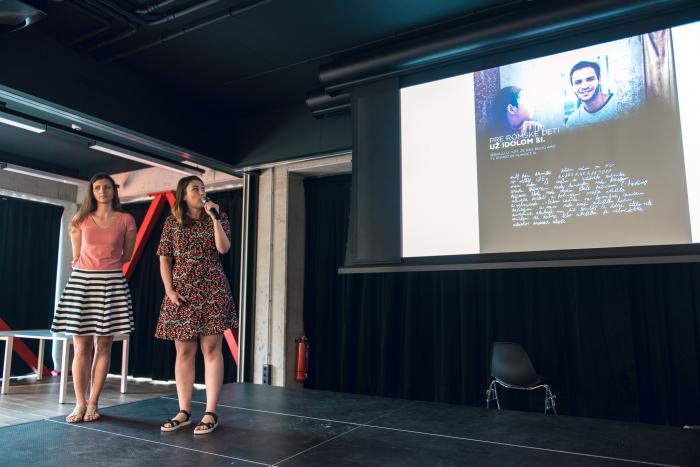 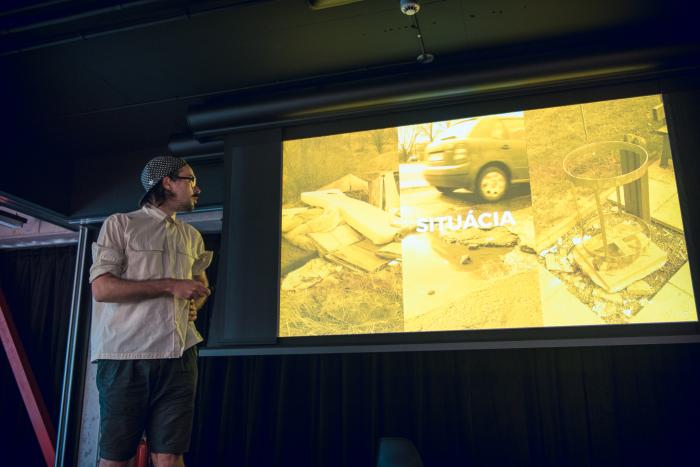 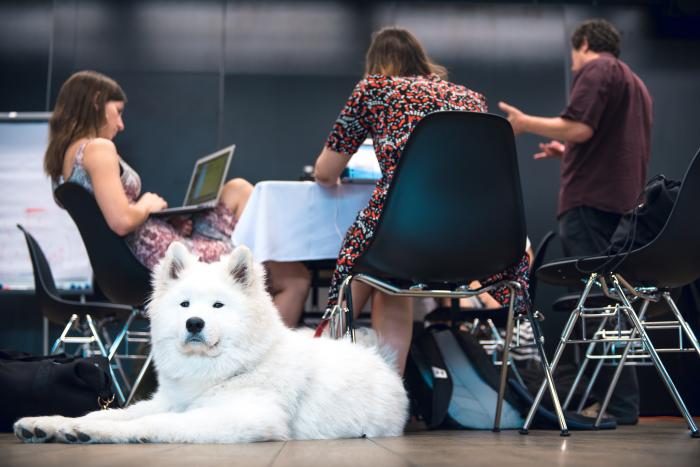 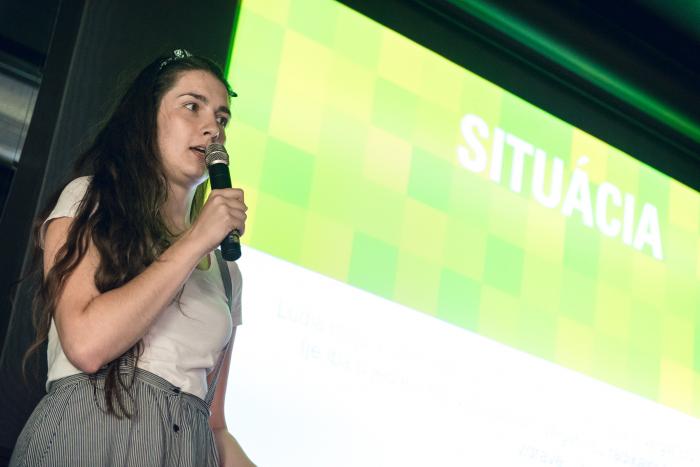 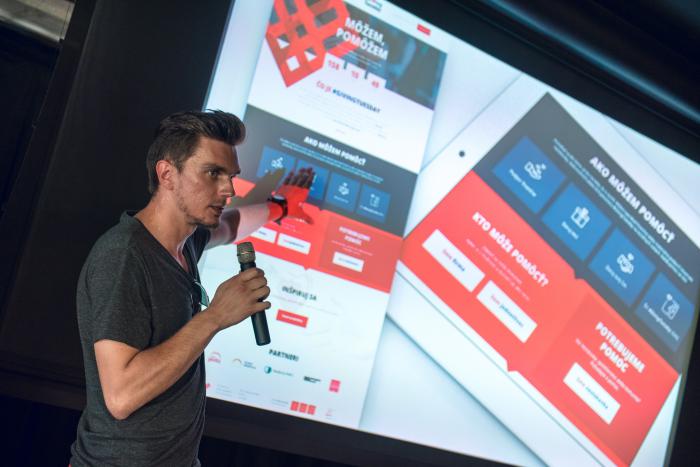