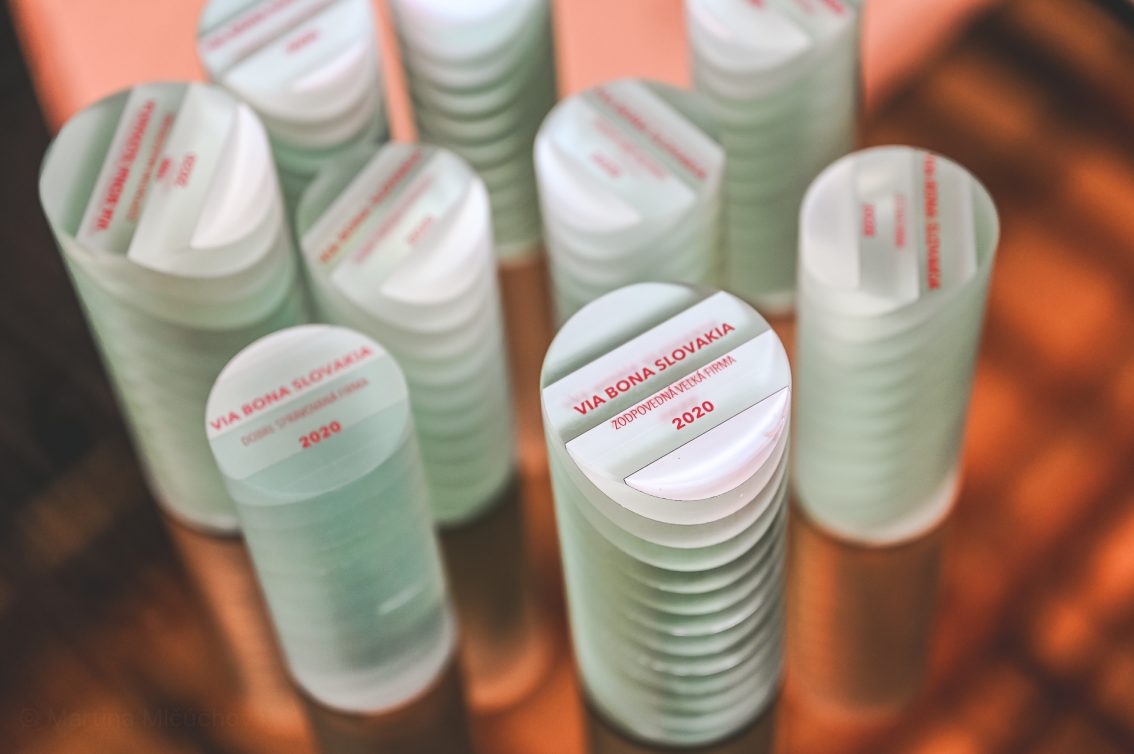 The Pontis Foundation awarded the most responsible companies of 2020. These are the winners

They have emphasised the acute need for mental health care, supported the establishment of a helpline, helped gastronomic enterprises survive the first wave of the pandemic, and systematically integrated disadvantaged people into work life. The Pontis Foundation awarded the most inspiring examples of responsible entrepreneurship in seven categories in Via Bona Slovakia 2020. For 21 years now, the Pontis Foundation has been highlighting examples of responsible entrepreneurship through the Via Bona Slovakia awards.

At the same time, we presented the concept of responsible entrepreneurship together with the winning projects to the general public in a television documentary broadcast by RTVS. “The documentary provides diverse examples of how companies can actively contribute to solving social problems and thus improve the country in which we live. I believe that it will help the public perceive fairness and corporate responsibility as the norm, not as something exceptional,” says Michal Kišša, Executive Director of the Pontis Foundation.

50 small, medium and large companies with 70 examples of responsible entrepreneurship applied for the Via Bona Slovakia 2020 award. Independent evaluation committees, composed of experts from the corporate, non-profit and public sectors, moved 21 nominations to the finale and selected the winners in the second round. Many of the projects reacted to the COVID-19 pandemic, which deepened inequalities in society.

Besides seven main categories, the Pontis Foundation presented two special awards – the Well-Governed Company, awarded in cooperation with the Slovak Corporate Governance Association, and the Public Choice Award, the winner of which was decided by readers of the SME daily in an online survey.

The winner in the main category Responsible Large Company is Tesco Stores SR for their long-term sustainability strategy, the fight against food waste and the promotion of diversity and inclusion.

The company’s responsible entrepreneurship strategy is based on four main pillars: content people; affordable, healthy and sustainable products; enhanced communities; and a healthy planet. Tesco is also a leader in the fight against food waste. In just two years, it has managed to reduce food waste in its stores by more than a half, thus contributing towards meeting one of the UN’s Sustainable Development Goals. Over 6,000 tons of food have been donated to people in need through the Food Bank’s donation programme so far. Moreover, the company has also managed to reduce its carbon footprint by 32% since it uses 100% of energy from renewable sources.

Tesco’s priority during the pandemic was to protect the health of its employees and customers, and it also massively strengthened the availability of online shopping. The company offered vulnerable groups of employees paid leave in the weeks of the worst pandemic situation and repeatedly paid an extraordinary bonus to all colleagues working in the first line. At the same time, the company places great emphasis on promoting inclusion and employing disadvantaged groups. 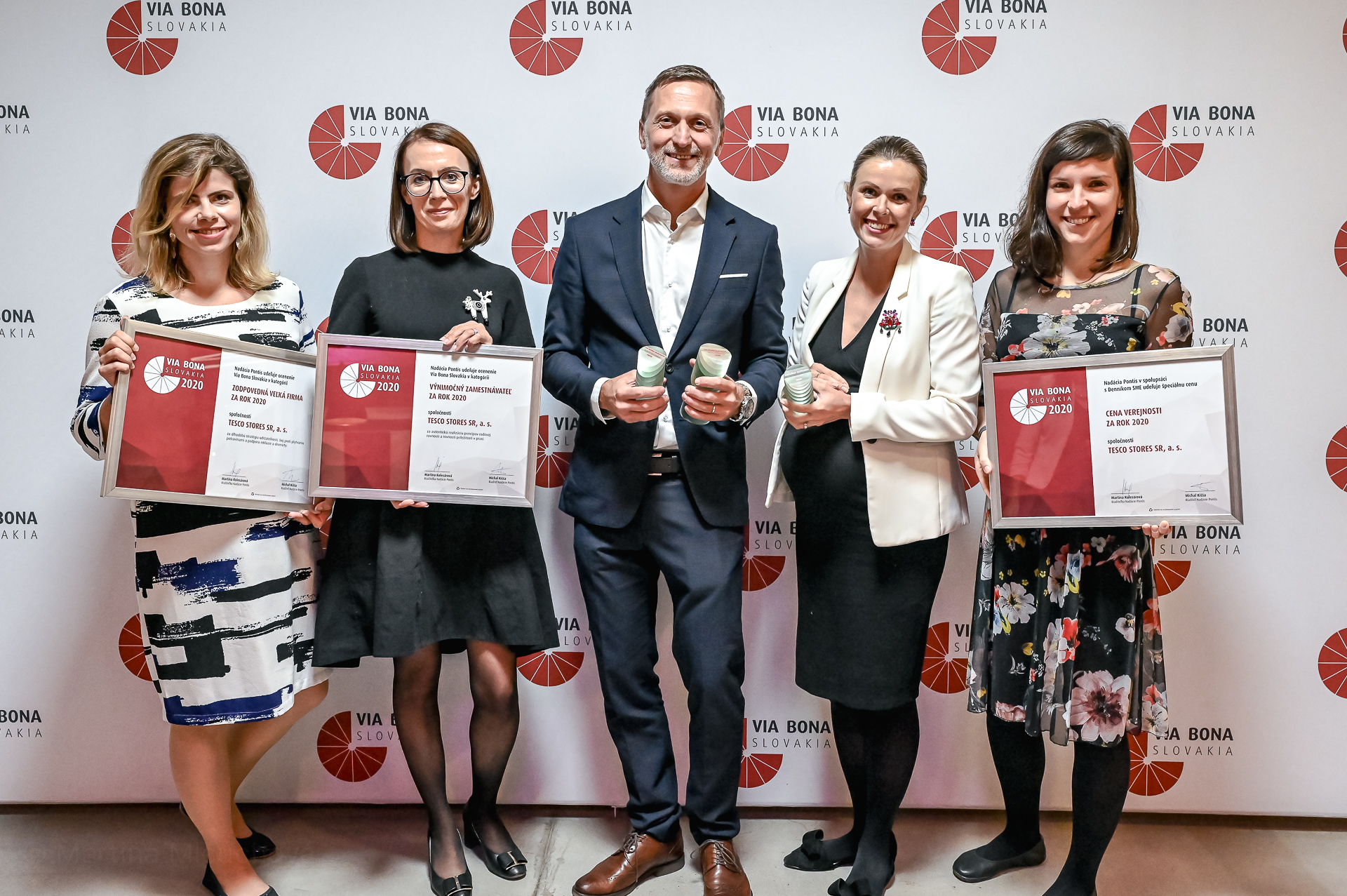 Tesco received the Via Bona Slovakia 2020 award in two categories, as well as the special Public Choice Award.

The award in the main category entitled Responsible Small/Medium Company went to ARES for the successful integration of people with disabilities into working life. The company’s story is the story of its founder and co-owner, Ján Drobný, who has remained in a wheelchair after a car accident. However, he perceived the situation as a challenge and today, he provides opportunities for a full life to people with reduced mobility. ARES manufactures technological solutions for overcoming barriers, such as lifting platforms, jacks, and special vehicle modifications. The company uses the profit for education, development and awareness-raising on the issue of disabilities. ARES also helps its clients with legislative issues. It provides them with information on state support free of charge. A quarter of employees are people with disabilities, and the company also runs a sheltered workshop. It is an example of the accessibility of corporate premises. Thanks to this care, the company enjoys minimal fluctuation.

The winner in the Green Company category is Sensoneo for the creation of innovation that brings data, transparency and efficiency into the field of waste management. The company has developed the WatchDog system, which helps towns and local governments predict the fullness of collection containers, evaluate the efficiency of transports, and thus increase environmental friendliness. The system is based on digital data recording, which optimises the collection process. Unique chips are located on each collection container and provide information on their current utilisation. Therefore, the collection vehicle does not have to make unnecessary trips and only goes where necessary. The process is automated, reducing waste costs and emissions by up to 63%.

In the category entitled Outstanding Employer, the award went to Tesco Stores SR for its authentic implementation of the principles of gender equality and equal opportunities in practice. With almost 9,000 employees, Tesco is the third largest private employer in Slovakia. Topics such as diversity and inclusion are therefore key for the company. This is evidenced by the introduction of training on the inclusive environment that all employees attend. Besides, the company organised a 3-week online Diversity Festival, which was attended by more than 2,000 colleagues.

Tesco has long employed people who reflect the diversity of society. One example is the growing integration of people from Roma communities as well as people with disabilities. Concerning the diversity in needs, the company introduced targeted benefits, which it has recently strengthened with above-standard family benefits. Within the framework of gender equality and equal opportunities, it also prepared an in-depth report on the pay gap, which the company later published as the only retail chain in the Slovak Republic.

The award in the category entitled Good Partner of the Community went to Orange Slovakia for emphasising the importance of mental health and striving for better systemic care. The issue of mental health has long been overlooked in Slovakia. The situation culminated during the COVID-19 pandemic when the number of people seeking counselling increased dramatically. The helplines were capacitively and technically undersized. Such was also the case of the civic association IPčko.

Therefore, Orange immediately set up a crisis helpline for IPčko, which received almost 9,000 calls by the end of 2020. At the same time, the company also modified the application for video counselling, which is the first of its kind in Slovakia. The company and its foundation also supported other projects, such as the Nezábudka helpline and the Child Safety Line. The Orange Foundation has also supported the creation of the Mental Health Line Initiative that educates about mental health and advocates for a systemic solution to the problem. 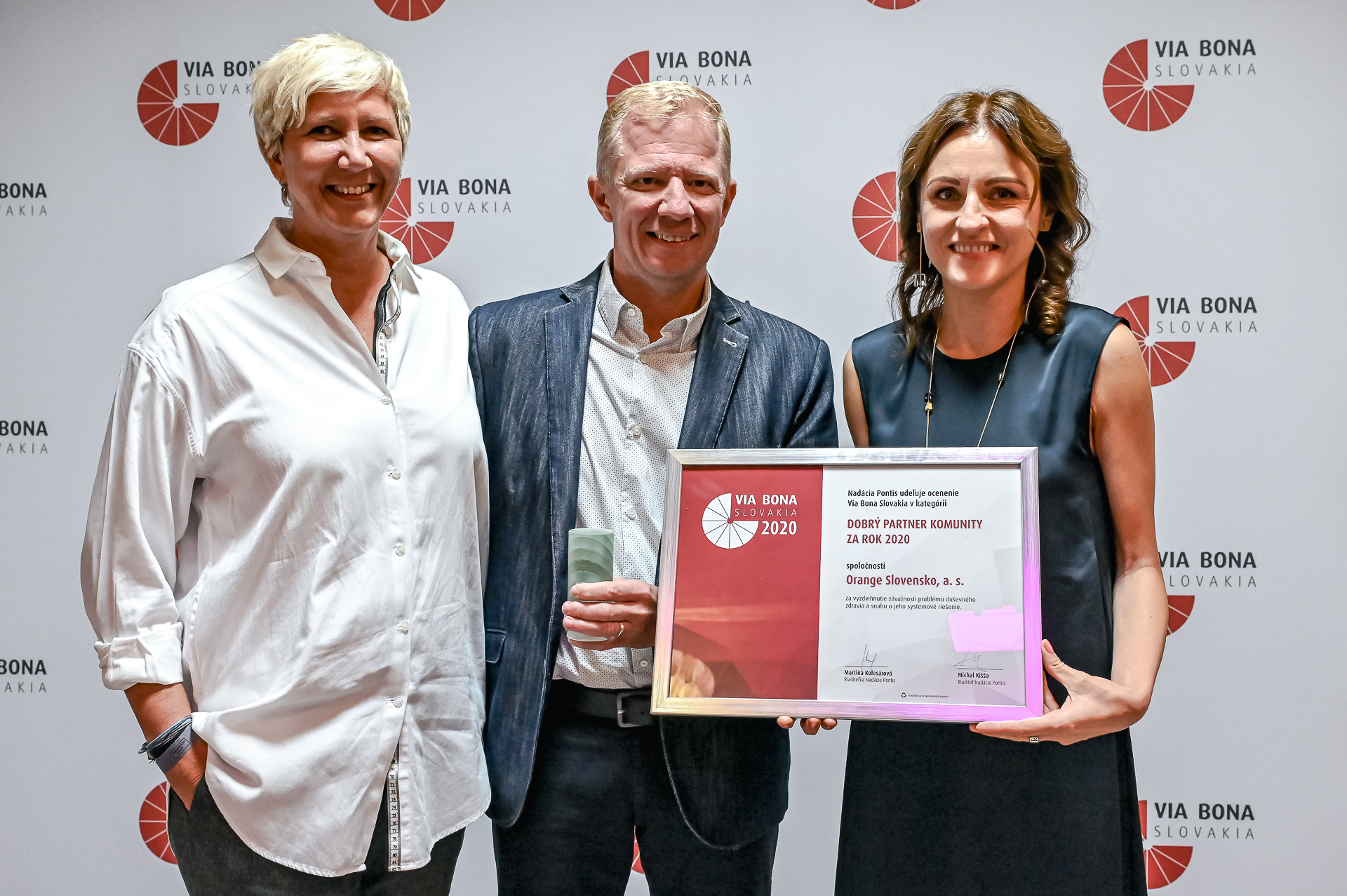 Orange Slovakia has long emphasised the importance of mental health and advocated for better systemic care.

NATUR-PACK received the award in the category entitled Socially Innovative Company for finding new opportunities to communicate an important issue of environmental education.

The company has long profiled itself as an innovator of environmental education. The key tool is the NATUR-PACK YouTube channel. It is the first independent channel in Slovakia that comprehensively deals with the issue of waste and educates the general public, as well as producers who are subject to obligations under the Waste Act. The channel was established in 2013 as a supplement to offline seminars, but with growing popularity, its real potential became apparent. Videos are attractive not only because of the topics they cover but also due to the involvement of interesting organisations, partners and influencers.

The award-winner in the Fair Market Player category is Plzeňský Prazdroj for help to its customers in the challenging gastro services sector during the COVID-19 pandemic.

After the closure of pubs and restaurants due to the pandemic, the situation was complicated for Plzeňský Prazdroj. The company indirectly creates up to 12,000 jobs. The company realised that the sector was based on the operations that were most at risk, so they decided to act quickly. They exchanged expired kegs of about a million beers at their own expense, postponed the payment of invoices and stopped the recovery of receivables. As part of the #podporsvojpub (tr. #supportyourpub ) initiative, they contributed to the creation of a platform for the purchase of vouchers for future consumption.

Prazdroj also provided over 3,000 pubs and restaurants with packages of protective equipment that was missing at the time. To motivate people to return in the summer, the company offered the second draft beer to customers for free. It was one of the largest consumer activations in the gastronomy sector in Slovakia. Besides other things, it was also thanks to these activities that up to 84% of companies survived the first wave of the pandemic. 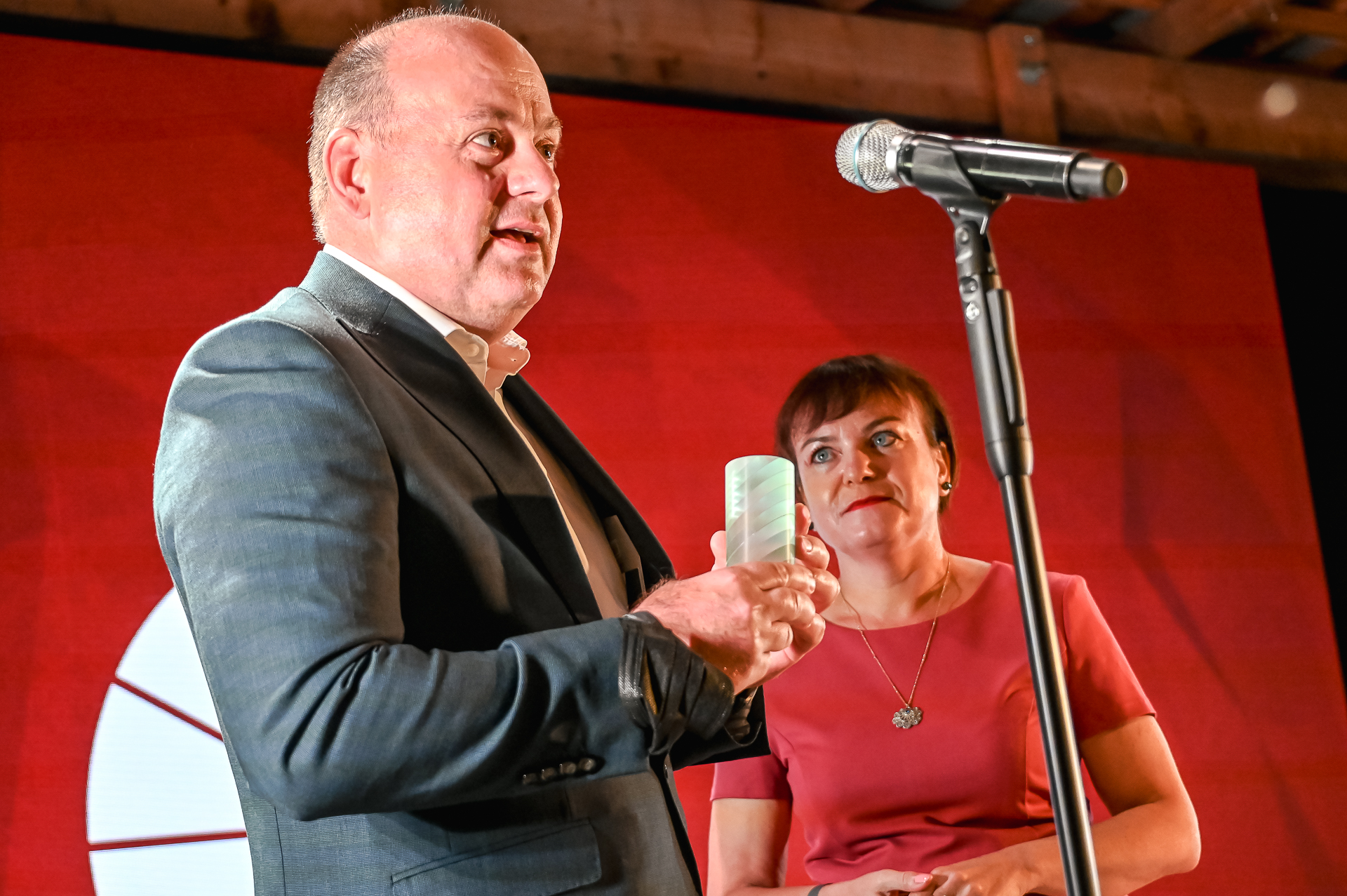 The Via Bona Slovakia award in the category of Fair Market Player category went to Plzeňský Prazdroj Slovakia for helping the gastro sector during the pandemic.

The winner of the special award in the category entitled Well-Governed Company went to Slovenská sporiteľňa for transparency in publishing data on corporate governance in accordance with the principles of Corporate Governance.