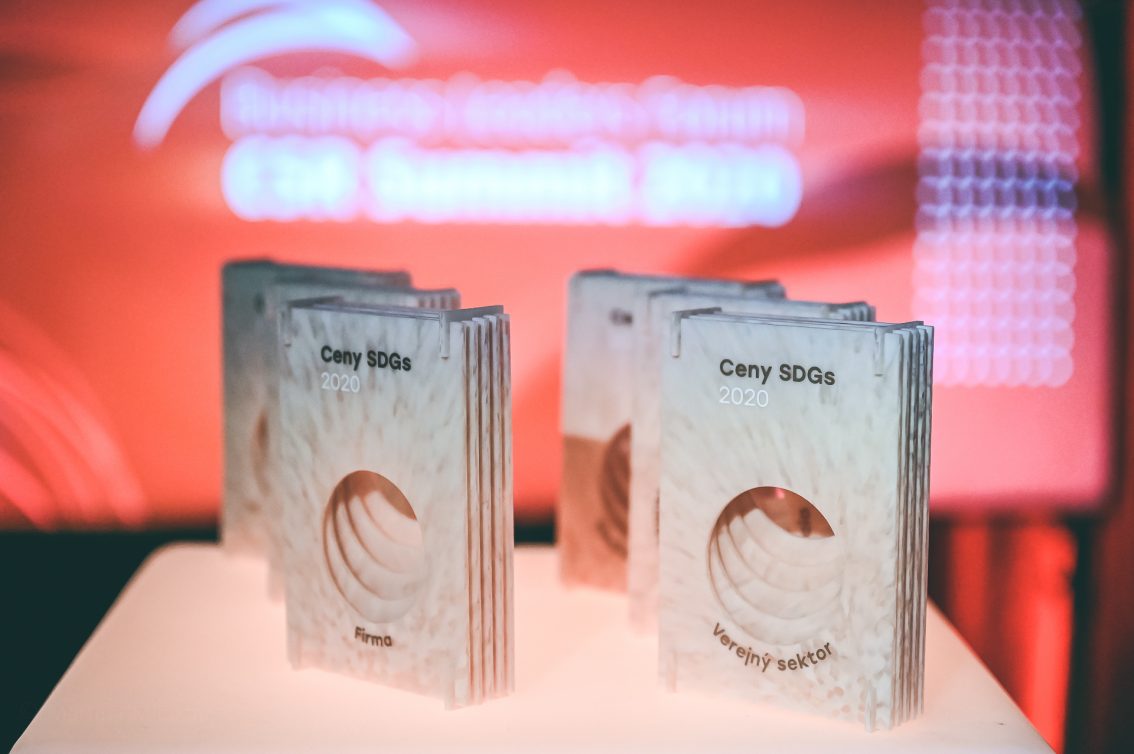 The award for sustainable development went to the Public Defender of Rights, the Pohoda festival and a Slovak scientist

The ceremony of the SDG Awards 2020 (Sustainable Development Goals) took place on the 13th of October as part of the largest conference on responsible entrepreneurship entitled the Business Leaders Forum CSR Summit. The Pontis Foundation presented the awards in the following six categories:

“The main criterion for the award was that, through their projects, the organisations, institutions and individuals had contributed to the fulfilment of Slovakia’s vision and development strategy for 2030. It is about the fulfilment of 17 goals which, according to the world leaders, aim to end poverty, fight inequalities and stop climate change,” explains Michal Kišša, Executive Director of the Pontis Foundation.

The award in the Company category has been presented for the first time. In the past, the Pontis Foundation awarded the contribution of companies to the Sustainable Development Goals at the Via Bona Slovakia gala event. This year, it has expanded the SDGs Awards with the category for companies. “I am convinced that, just like organisations, institutions and individuals, companies can make a significant contribution to the fulfilment of the goals associated with slowing down climate change, reducing inequalities and improving education,” says M. Kišša.

The nominees were selected by a commission composed of representatives of various sectors: business, media, public and non-governmental non-profit sector. The commission then also chose the award-winners.

For her active contribution to reducing inequalities, protecting the rights of Roma communities, women and senior citizens, who belong to the most vulnerable groups in society.

As the Public Defender of Rights, Mária Patakyová fights with great determination and professional commitment to uphold human rights and strengthen the rights of minorities. Even though she often encounters resentment and contempt from the governmental and political leaders, she defends the rights of the discriminated and overlooked communities and individuals, giving her office the seal of a stable institution which does not bend under the influence of politicians and interest groups.

For an innovative approach to education and commitment to fighting generational poverty in excluded communities.

Civic association Cesta Von (tr. Way Out) helps people trapped in poverty stand on their own two feet, get a job and a dignified life. Through the Omama project, the organisation helps the development of children in excluded communities. Through home visits, it supports the healthy cognitive, social and psychomotor development of children living in generational poverty during the most critical period of a child’s life (from 0 to 3 years). Visits are carried out by trained Roma women from settlements. Through their work, they both raise their own standard of living and become part of the solution to generational poverty.

For an effective mobilisation campaign which provided necessary and fast assistance to health professionals and vulnerable groups during the Covid-19 pandemic.

At the time of the first wave of the Covid-19 pandemic, Slovakia was struggling with an acute shortage of medical and protective equipment for front-line workers. The #KtoPomozeSlovensku (tr. Who Will Help Slovakia) initiative responded to these needs faster than the state administration. Thanks to the connection of companies, institutions and individuals, it brought effective and quick aid. It helped the Slovak medical facilities cope with the pandemic through a transparent system of financing and providing material assistance for hospitals and social services homes and services for vulnerable groups.

For the development of plastic from renewable sources, which is 100% compostable.

Pavol Alexy has been researching plastics from renewable sources for more than 20 years now. His team at the Slovak University of Technology in Bratislava, in cooperation with the company Panara in Nitra, is developing special bioplastics which can decompose in nature without leaving any environmental trace. It is the first bioplastic in the world which meets the basic requirements for mechanical properties, can be produced purely from renewable raw materials, and is fully degradable in a natural biologically active environment, which allows it to be described as ‘full eco plastic’.

For exceptional commitment in the fight against extremism in public space and for spreading the ideas of freedom, equality and the rule of law.

After the 2016 parliamentary elections, Marek Mach decided to address the topic of fascism as a freshman at the grammar school. He created the Young Against Fascism project, which aims to spread the idea of freedom, equality and the rule of law using a language understandable to his generation, hence reducing the impact of fascist ideas and misinformation on young people. Its activities are unique. The project approaches the issue in a modern and progressive way (social networks, videos), thanks to which it has had measurable results and a real impact on society.

For many years of effort, implementation and access to affordable and clean energy at summer festivals, and raising awareness in the field of ecology.

Part of the philosophy of the Pohoda Festival is care – not only for its participants but also for the environment. The organisers emphasise sustainability in several fields: they offer various ecological transport options to the festival (special public transport to the festival, cycling support, carpooling), they use returnable glasses and compostable dishes and provide assisted sorting of secondary raw materials. The festival strives to maximise the use of electricity from the fixed network as well as solar energy. It also optimises resources and their distribution, so that it is no longer necessary to use diesel aggregates at the festival.

The award is sustainable, too

The award itself is in line with the idea of sustainability. It is the result of the work of a creative studio entitled crafting plastics!, established by a well-known pair of Slovak designers Vlasta Kubušová and Miroslav Kráľ. The award consists of several layered NUATAN boards, made of innovative ecological material from renewable components, which is also biodegradable. The circular holes through which light penetrates symbolise more than 20 years of Pontis Foundation’s effort to connect companies, non-governmental organisations, government institutions and individuals.